If you look up Drama Queen in the dictionary you’ll find my name there.  But only under the subsection of ‘person most likely to make a fuss if there’s any chance she might be sick on a boat’

I’ve mentioned before that I have quite a severe sickness phobia.  It’s called ‘Emetophobia’ meaning fear of being sick.   It’s well managed, but at times can be very debilitating, at peak sick bug season for example.  Another time it can rear its ugly head is when I’m having to travel on a boat and there’s a chance it might be bumpy and I worry that I might be sea sick.  This is not so handy when I live on an island, and sometimes boat travel is unavoidable.  This week I had one of those unavoidable boat trips.  I had to travel to another island and while it was only a short crossing, (half an hour) I started building myself up to it days before.

Having been married to me for several years now, Orkney Beef knows the drill.  I start checking the weather reports days before, then turn to him for the advice of crystal ball proportions.  Orkney Beef is an ex-fisherman.  He’s been going to sea since before he started school. (That was a LONG time ago)  He knows all about the sea, the waves, the tides, the wind speed and direction and anything boat related.  On that basis I expect him to predict exactly what will happen and what the boat will be like.  Will it be rocky? how rocky? how bad? do you think I’ll be seasick? He usually says the same thing. ‘you’ll be fine’ By the time I’ve finished interrogating him, as a response like ‘you’ll be fine’ is simply unacceptable. The conversation goes like this.

‘you always say that because you’re used to being on boats and can cope in any weathers and never get sick.  How do you know I’ll be fine?’

‘Have you ever been sick on a boat’

‘so you’ll be fine because you always are’

‘I think you’ll find it’s all in my stomach’

and so on and so on.  I go round in circles, checking the weather, worrying, asking advice from anyone who knows the sea, being told I’ll be fine, worrying and generally making an almighty fuss.  The easy option would be to cancel the trip but I can’t do that because that would be letting the fear win and I would be really annoyed at myself.  So I HAVE to go by my own rules.

D day arrived and I woke at 3.30am and listened to the wind. Then I woke at 5.30am and checked the website for the latest weather update.  hmm yellow warning for high winds.  Then I wake Orkney Beef.

‘do you think the boat will go’

‘that other boats are canceled but mine isn’t’

‘Then your boat is going’

I braced myself, drove my car onto the boat, (having observed the white horses on the sea) and prepared myself for the grim crossing.  It really was the bumpiest boat ride I have ever been on.  In fact here’s a picture of the boat taken by Gary Nicolson.  The very boat I was on. 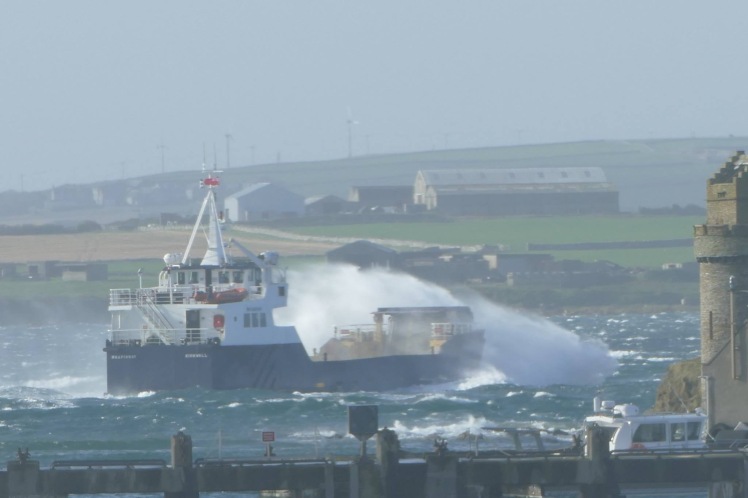 And guess what readers.

I was fine! and then I feel stupid for worrying so much.

So to all the people, I made a massive fuss to, I’m sorry for being a drama queen. But at least I know I can do it for next time!