Many of you will remember I did a Sponsored Swim last year. It was to raise money for Women’s Aid in memory of the death of my cousin Steph. Women’s Aid decided they would like some benches for the garden and this week they were delivered. It was very touching to see them in situ and a huge thank you to every person who contributed to these special benches. Also a big thank you to William Shearer’s who put the benches together, added the plaques and delivered them all free of charge. Excellent customer service as always with this fabulous shop in Orkney. It sells everything you could ever need in the whole world, I’m not even kidding.

I’ve been working hard to achieve my half an hour’s down time after work.  (There’s irony!) While it’s unrealistic to think I can sit at the beach every day, this is Orkney after all, I can still make the effort to go there and read in the car.  Midweek had the mother of all storms.  It seems to happen every year just as the peonies are in flower, ready to smash them pieces.  It was far to windy to even get out of the car at the beach so I sat in it at the car park looking out like all British people do.  It had a similar effect of being in a flight simulator and I patted myself on the back for enforcing the me time whatever the weather. 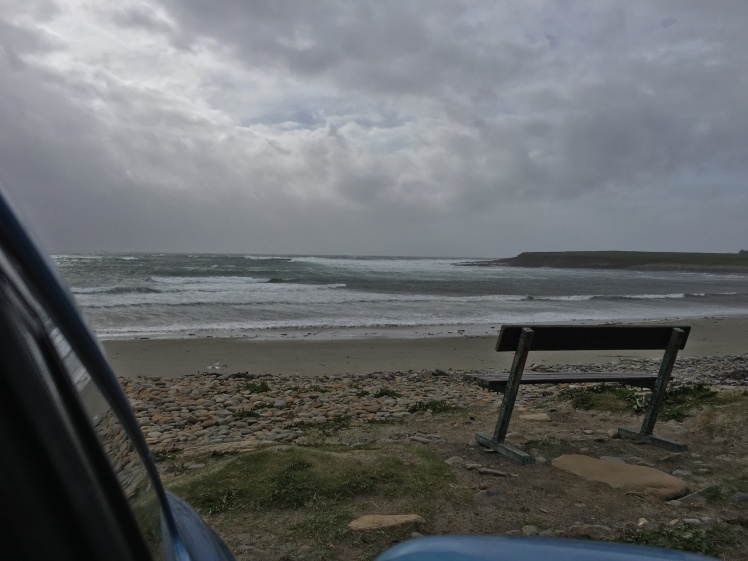 Every year at this weekend our church has a weekend away. We hop on a boat and visit another island, usually Hoy and this has been the tradition for the last 15 years.  Mercifully the storms had passed and we were armed and ready for some fabulous weather, good company, laughter and enormous amounts of homebakes.  It did not dissapoint.  I love my church family.  They really are the best.

The island of Hoy has a hill called Ward Hill.  The highest point in Orkney.  8 Years ago I climbed it with Orkney Beef.  I wanted the challenge of doing it again and I knew being 8 years older and not very much wiser it was going to be hard.  I think it ended up being the toughest challenge I’ve ever done.  A group of us went up, some faster than others, me the slowest of the lot by a mile.  I inched my way up huffing and puffing along the way.  Fantastic friends encouraged me all the way up and I cried when I reached the top.  My watch tells me it was 50 flights high, I’m told it’s just under 1500 feet.  The terrain was rough and rocky, challenging and in places very steep.  It was tough for everyone and for me extremely tough but I made it and the feeling was exhilerating.  Thanks to everyone who cheered me on.

Coming back down was equally challenging.  By the time I reached the bottom I was willing to pay £100 to anyone who could bring me a cup of tea.  I was in bed by 9.30pm and my legs were killing me but now when I see the Hoy hills from my sitting room I can remind myself how  determined I was.  Walking poles were a life saver and I borrowed some from my friend Lady Penelope.  If I ever ask to borrow them again, it means I’ve had a notion of another go and I give you permission to sedate me and lock me in a room until the feeling passes. 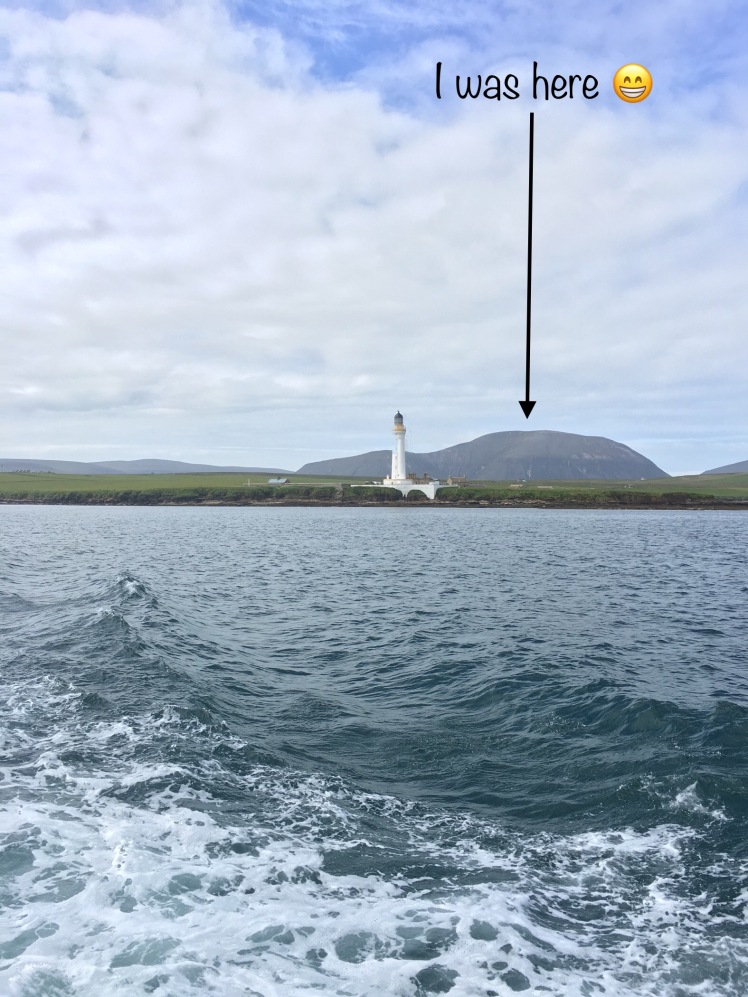 Father’s day is celebrated today in the UK.  My own dad  Father Bear is a little shy of the blog attention so I won’t picture him, but I can celebrate and thank him for being a super dad to me.  Orkney Beef also had lots of lovely gifts too, including cuddles from Peedie Smiler. 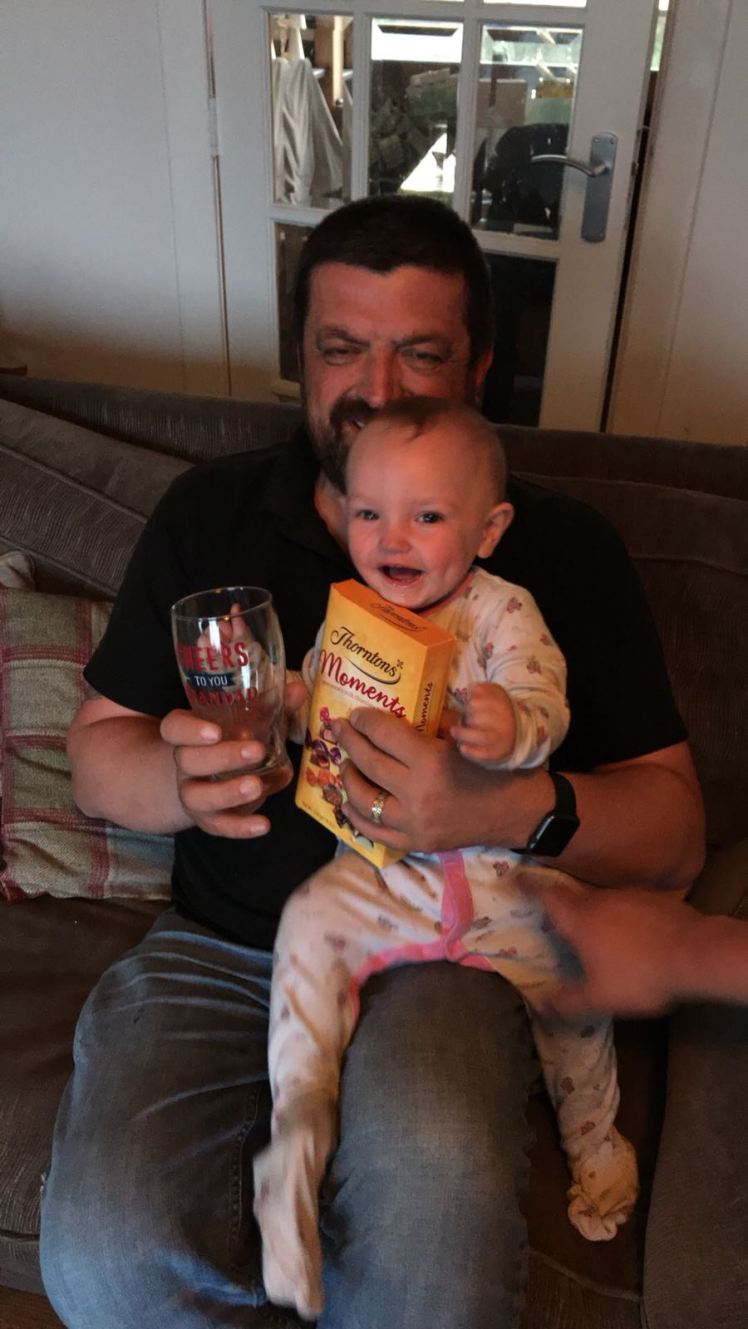 Tech Support is now old enough to buy alcohol. This made Orkney Beef VERY happy to be on the receiving end of a bottle of whisky.  Thankfully no one in the house touches the stuff so it’s safe. Thank you Orkney Beef for being a brillaint step dad, dad, grandad and okayish husband.  😉 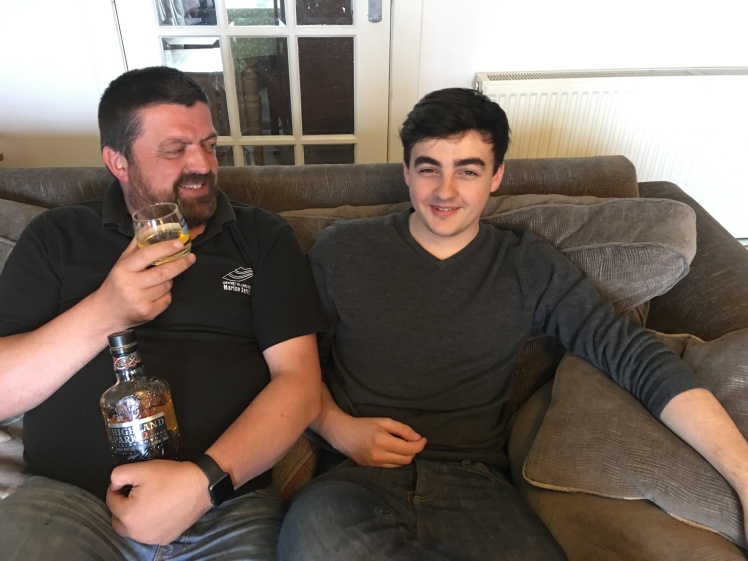 and finally, as we all know its World Cup season.  Orkney Beef is a rare species as he isn’t that bothered about watching it.  But my heart goes out to all the women who’s view for the next month will be something like this.

Paul used to be a professional footballer so it’s natural he’s going to have a keen interest.  His wife Caroline (an origonal WAG) is now a football widow. I’m pleased to see her wine glass is topped up.  She’s going to need it!

2 thoughts on “My Week In Pictures – Fun Times, Uphill Challenges and Football Widows.”