”Can you just hold on one second?’ *drops landline phone*

‘Sorry, while I was talking to you I saw a postal van being lifted on to a boat and had to run and take a photo of it for the blog’

So this is what life is like for you if you’re friends with me in real life.  I can ditch you mid-conversation to whip out my phone and grab a moment of island life which may be of interest.  I happened to be working from a different office and was on the phone looking out the window just as the van was being positioned on to the boat.  It was off to Graemsay, an island which has no roll on roll off boat so things are lifted on by crane.  Cars, vans and cattle in containers.  This aspect of traditional island life fascinates me.

Not only am I stopping mid-conversation with long-suffering friends but I’m forever pulling over my car to photograph skylines and nature.  I only have an iphone, no fancy camera and sometimes photos don’t do the atmosphere justice but here’s a few from my daily commute this week.

The mood and atmosphere was sublime at Stennes on my journey to work.

and the Orkney skies simply glorious whether the sun was rising or setting.

Last weekend I managed to put my back out in a spectacular way.  By Monday morning I could barely get out of bed and was in agony.  I know that moving is the best thing but at one point I honestly thought I wouldn’t be able to drive.  Thanks to painkillers and lots of groaning I finally got going but I didn’t swim.  I was feeling too fragile and didn’t want the humiliation of not being able to get dressed!.

Things picked up later in the week and I managed a fabulous swim on Friday.  The weather was amazing for October.  It felt like summer and the four of us who met at lunchtime felt like we were cheating Autumn. 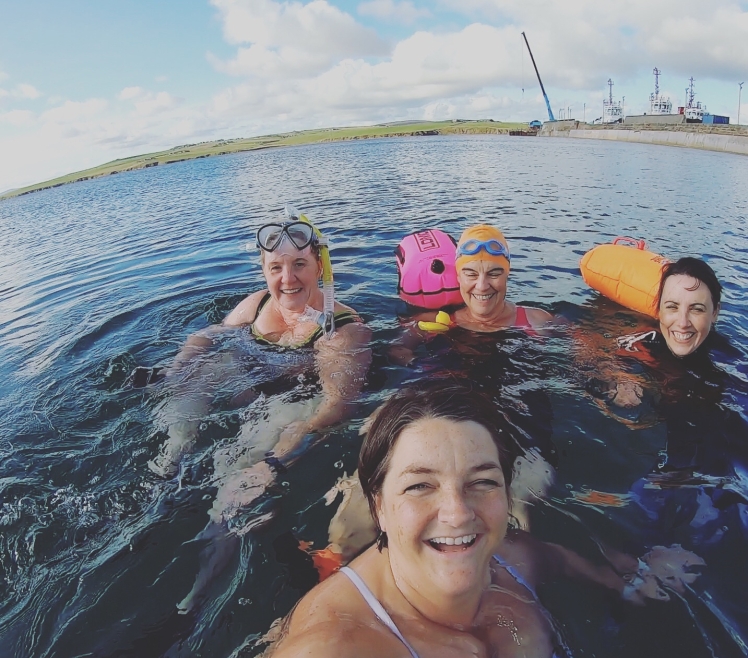 The following day a group of us took part in in a global initiative to promote positive mental health.  People all over the world swam at sunrise.  There’s something quite exhilarating about swimming outdoors early in the morning, once you’ve dragged your sorry backside out of bed.   It was called Global #swimrise and was run by the Human Excellence Project. Here’s a shining example of human excellence if ever there was one.

and we even managed cake at stupid 0′ clock in honour of Ally’s birthday.  This candid photo of her trying to dress with dignity in the rain whilst balancing a wet cake on top of the car epitomizes everything about outdoor swimming in the Orkney Polar Bear community.

I’ve said this before and I make no apology for saying it again.  I am surrounded by the most beautiful people both near and far in my life.  I have many friends and lots of them I often have to squash into lunch breaks simply because I work full time, and they are very tolerant.  One friend I visit once a week at lunch time. I come flying in the door and apologise for having forgotten my lunch (again) and she makes me something and I sit and talk about myself for an hour then leave in a blur because I’m running late (again).  She knows who she is, and I love her and thank her for always listening. Another friend (pictured) met me for lunch this week and brought flowers as always. Thank you so much, they are just gorgeous as is your company! X

That reminds me, I must get my roots done.

The Starfish Story-
One day a man was walking along the beach when he noticed a boy picking something up and gently throwing it into the ocean. Approaching the boy, he asked, “What are you doing?” The youth replied, “Throwing starfish back into the ocean. The surf is up and the tide is going out. If I don’t throw them back, they’ll die.” “Son,” the man said, “don’t you realize there are miles and miles of beach and hundreds of starfish? You can’t make a difference!”
After listening politely, the boy bent down, picked up another starfish, and threw it back into the surf. Then, smiling at the man, he said…” I made a difference to that one.

Have a great week everyone.  Thank you for reading.

4 thoughts on “My Week In Pictures – Island Life, Friendship and Global #Swimrise”

There was an error retrieving images from Instagram. An attempt will be remade in a few minutes.