I don’t know if there’s ever a good time for a boiler to break down and be declared beyond repair, but I can tell you when it’s a really bad time.  When Europe reaches a record-breaking cold snap, central Scotland is put on red alert for snow, planes trains and automobiles are grounded to a halt and Orkney is reading minus 5 on the temperature gauge.  That’s a really bad time.  Readers, you know where this is going don’t you?

Admittedly our combi boiler has been limping along for months, but just when the temperatures reached figures cold enough to peel a layer of skin off your face it decided to pack up altogether, leaving us with no working radiators or hot water.  To say I was miserable puts it mildly.  I know my forefathers managed many a winter without heating and hot water but if I was a betting woman I would steak a years chocolate supply on the fact they were miserable too.

I’m not sure if I can lay all the blame for the big freeze entirely on my son, but he may have done enough damage to get a stern look.  How may you ask?  By getting a tad over excited at the first sign of slightly decent weather and cooking a BBQ for tea on Monday evening.  So I came home to sausages and burgers cooking outside.  I use the term ‘cooking’ lightly, it all had to be completed in the oven before one of us died of hunger but Orkney Beef reminded me to be grateful that at least my teenage son was having a go at cooking. Personally, I think this was to stop me having a hairy fit….

Things took a significant nosedive the following morning when the forecasted freeze arrived.  By mid-week lochs were frozen over and sheep were huddled together in fields to keep warm.  Most of you will know all this of course, you were there.  Many people were stranded as airports and roads canceled transport. It could have been worse, but not much.

Despite the weather Orkney Beef and I still managed a trip down to one of the south islands to watch a film called ‘Resilience’ followed by a discussion.  It was well worth the effort and I left feeling inspired.  ‘What could we achieve if we were 10% braver?’  we were asked.  I don’t know, but I’m going to find out as I aim to be a light in the darkness like the brave speaker we heard.

We were on the receiving end of much human kindness this week as we were inundated with offers from friends to stay in their homes, use their showers, borrow their heaters, hot water bottles and flasks.  We were so grateful to people wanting to help and continue to be thankful to have so many kind and supportive people in our life.  Friends popped by on Friday evening and we ended up laughing until we cried. Our house was cold but our hearts were warm.

In other news the hens haven’t laid eggs in months due to the dark and cold.  I remain their servant providing food and water and they give me nothing in return.  But they survived the cold and I shall be expecting my reward in the near future.

I saw sheep huddled together behind an ancient standing stone on my way to work this week.  Orkney Beef and I had to do the same to keep warm in our freezing house.  I only took my coat off to go to bed one night and then I didn’t jump under the duvet until I had warmed  the bed up with three hot water bottles. 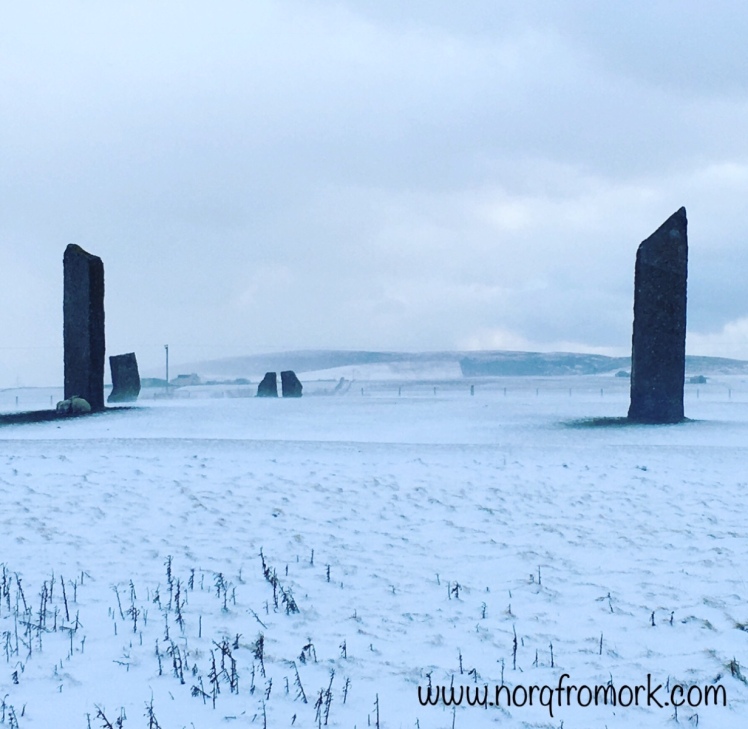 We have now reached the dizzy heights of 1 degrees, it’s practically tropical.  Hopefully, that’s the last of the snowy cold and I will have to find something else to moan about.  I’ll see what I can do. 😉  Have a great week everyone. And let me know what 10% braver looks like to you.