It seemed like a good idea at the time when I was invited to an event in Orkney called Darkness Into Light Walk via Facebook. I had a brief scan over the information and realised it was in aid of raising awareness of mental health issues and removing the associated stigma.  It all sounded very worthwhile so I clicked accept and thought no more of it until closer to the date a few days ago.  Then it dawned on me (‘scuse pun) that it was more than just a walk.  It was a dragging my sorry backside out of bed at around 3am and in the dark and walking to the top of Wideford Hill for sunrise. I guess the clue was in the most obvious title  ‘Darkness Into Light Walk’ duh!  I should have read the small print.

I’m not great when sleep deprived.  I’m not great when wide awake to be honest so knock off a few hours sleep and I struggle to string a sentence together.  (hard to believe I struggle with talking I know) My childbearing, waking at 2am, 3am, 5am days are over so as the day approached I began to regret it.  Added to my regret was the forecast for thunder and lightning right the way through the very night we were due to walk.  I didn’t fancy getting struck by lightning while walking up a hill in waterproofs and high viz gear.  (or at all, let’s be honest)

My lovely friend Suzanne is a psychologist in Orkney so this is a subject close to her heart.  She offered to come along with me so I invited myself to stay the  night at hers so I would have less to travel in the early hours and get an extra half hour’s kip and she willingly obliged.  In the few hours sleep before leaving, the rain hammered down and the sky lit up with lightning and rumbled with thunder. By now I was dreading it.  My smile is a complete lie. 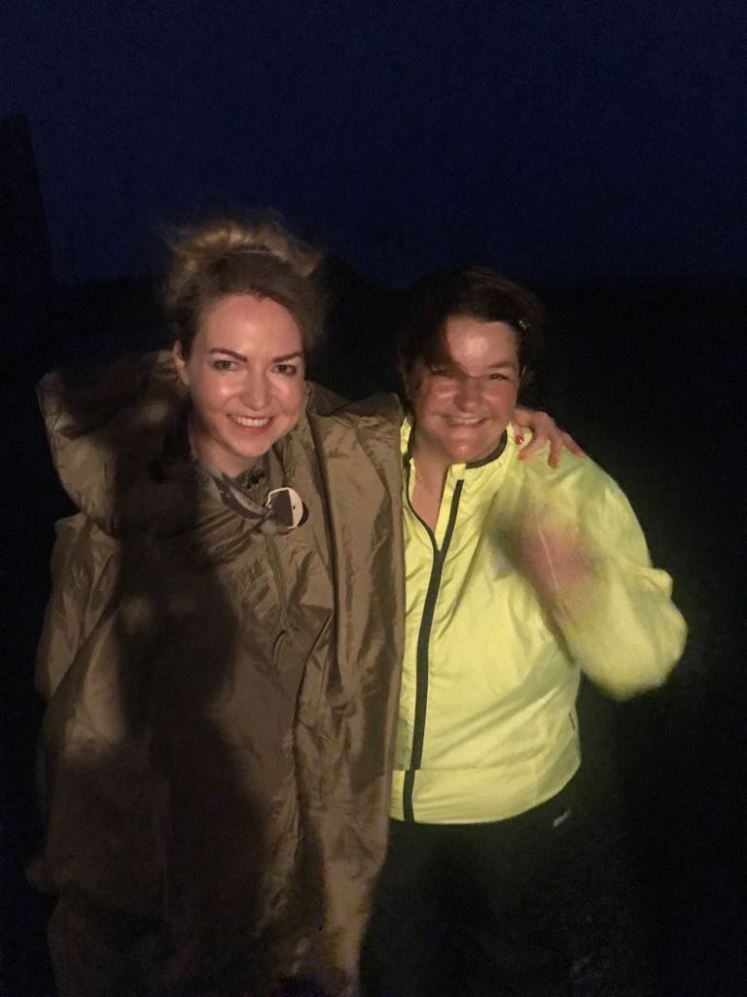 As 28-year-old Lorraine Flett the organiser quite rightly pointed out, getting up in the morning and facing the world can be a struggle if you have depression or other mental health conditions, so it was quite symbolic to recognise this.  Having suffered from and been treated for depression myself in the past I know the darkness that can surround facing life when your mental health is not great and I know many people can identify.  Almost all of us at some point in our life can be affected by poor mental health.

The rain had thankfully stopped by the time we arrived at the meeting point and it was touching to see so many people wanting to be involved.  Due to the forecast of lightning, a decision had been made to take a different route rather than go to the top of a hill so the walk was slightly shorter but just as symbolic. People had glow sticks and bands and sweeties to keep us going.

A quick group selfie and we were off.

Remarkably the rain stayed away the whole walk and I am full of praise for the way it had been organised.  It was low key, relaxed and no one was left behind. It wasn’t about racing round it was about taking part and it had been organised for all abilities.  Cars were at various stations on the route so if anyone wanted a lift back to base they could hop in a car.  It wasn’t a huge walk, about four miles due to the reroute.  But even so it was good to see everything had been thought of.  There were snacks handed out along the way and the group stopped to allow the stragglers to catch up.  (I won’t lie, the stragglers were often me and Suzanne due to our being engrossed in conversation)

Someone had gone to the trouble of lining a path we were walking down with little tea lights which I found so touching.  It was all so friendly, and I thoroughly enjoyed the experience and at this time of year, it’s rare for me to see the sunrise.

When we finished the walk, breakfast was served.  In true Orkney style there was the provision of sandwiches and snacks enough to feed Napoleon’s Grande Armée.  Sandwiches of every description, homebakes, drinks. Excellently done.  A big thank you to everyone who gave up their time to volunteer and provide for the 52 walkers. The current total raised is already over £2000 and rising.  This will be going to local charities that support people with mental health conditions which is fantastic.  A massive well done to Lorraine for organising this.  It was a privilege to take part and everyone will have had their reasons for doing so.  All wanting to reduce the stigma of poor mental health.  If something goes wrong with our bodies we think nothing of seeking help.  We often struggle to do so, even now with our mental well being.

In the words of Lorraine.  ”Lets keep talking”

I have been approached by a company looking to collaborate with this blog and provide resources for people looking for support around their mental health.  When this is sorted you’ll be the first to know.