Orkney Beef is in big trouble, so is his side kick Dixie Chuck. They share a mutual interest in country music, dogs and winding me up. I get a lot of stick from them both on Facebook but today they took it to a new level.

I returned home from work and as usual went to check on the hens.  I found another egg in the nesting box making now a total of three. Orkney Beef came to see too and I commented on how it was still quite warm so it must have been laid recently.  Orkney Beef suggested I fry it for him as he wanted to try one.  Being the loving, caring, devoted wife that I am I agreed to fry it and he said he would video the momentous occasion.

Orkney Beef poised ready to film the cracking of the egg. Check

I cracked the egg open and was totally mystified.  How come no beautiful yellow yolk popped into the pan ready for frying?   Because Orkney Beef, who was now in stitches with laughter, had collected the egg earlier, hard boiled it and put it back in nesting box that’s why.

The idea had come from Dixie Chuck who had messaged Orkney Beef a few days earlier. He lives else where so it was up to the two of them to ‘hatch’ the plan together.  Miss Lashes was also told about it. ‘Happy Fry-day’ said she.  There are lots of egg puns flying around just now, the eggspression on my face must have been priceless. However, revenge is a dish best served cold and these two tricksters need to sleep with one eye open. Good one boys, this chick was well and truly had! 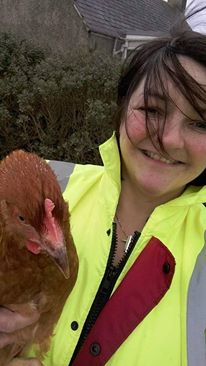