Did you know today is world smile day? For me it’s been less smile and more grimace.

It all started a few days ago when I went along to my first ever Fatburn Extreme class.  It’s the latest lard busting exercise class that I’ve seen and read about and is said to be very effective, so I decided it was time to give it a try. I dreaded it all day but I’d signed up to go, and shame of backing out motivated me if nothing else. I’d already asked if I could stand at the back with the lights off and was told yes to the first but no to the second; and the instructor was primed on how unfit I was. Anyway, I survived the class (just) and went home feeling rather proud of myself that at least I’d managed to go, do the class (within reason) and I didn’t actually die during the process.  The problem arose the next day when the pain started to kick in.  The Orkney word for it is ‘breexed’  meaning aching muscles after exerting yourself.  Well I was breexed +++.  By the end of the day I could barely move.

When I got home I put the following Facebook status up.

”Speaking hypothetically, if someone quite *cough very * unfit went to their first ever Fatburn Extreme last night and today was in considerable pain, so much so they could barely reach the bottom shelf for a packet of wagon wheels (for their son), when would you expect them to be able to walk unassisted again? I’m asking for a friend.”

What continued was hilarious conversations where people were very concerned for ‘my friend’ and offered support, advice, and much sniggering.  Most said that it would be worse for ‘my friend’ on day 2.

Readers, they were right.

Orkney Beef doesn’t have a great deal of sympathy.  His multiple organ failure with minimum fuss last year trumps everything, so when I actually whimpered last night as I sat down after one evenings exercise, he suggested I might be exaggerating a bit.  How very dare he.

Today I spent most of the day walking somewhat gingerly.  There was an unfortunate incident when I accidently hit the panic button at work and then had to run to the back office to reset it. Not an easy task when your legs are in agony, and there was most definitely a snigger from my colleague next to me. (You know who you are!) But finally  my tired legs are starting to improve and I can almost get up and down without any groaning sound effects.

When it comes to exercise I’ve tried them all over the years.  In the 70’s we had a Popmobility  record (I even found pictures!) which we got free through saving tokens from cornflake packets. So basically you ate your way through a stack of breakfast cereal then worked it off with the free record. You had pictures to follow and had to do your best to work out what you were supposed to do to the music. 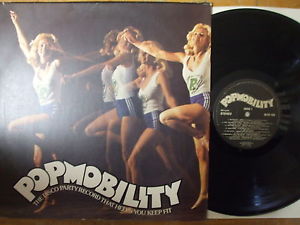 This was followed by  ownership of a Jane Fonda cassette where at least she told you the instructions. Moving into the 80’s I progressed to a generic ‘aerobics class’ No fancy name, they came later.  But aerobics was a chance for you to jump about a bit to music for an hour and leave feeling smug.  Then came ‘step aerobics’ where you stepped up and down for an hour.  You could even buy an expensive plastic step and video to do your step aerobics at home.  Stepping up and down on the bottom stair didn’t count, it was a cheap copy. Still in the 80’s there was a season of jumping up and down on a trampette thing.   I can picture the perms and headbands as I type….

There’s been Mr Motivator (uh huh, oh yeah) Zumba, Wii Fit, dance mats, spin class, gym, weight training, dvd’s to name but a few.  Where Extreme Fatburn will end up I don’t know.  But I’m reliably informed that if I was still hurting after two days, then I was still burning fat.  If today’s pain is anything to go by then I should have disappeared by tomorrow. I’ll keep you posted.