This week, you have mainly heard me stating the obvious.  Mainly ‘it’s sooooo coooold’ which could be expected for Winter but nevertheless doesn’t stop me moaning. Orkney Beef had quite a bad cold earlier in the week and added to that had the dreaded sick bug.  This was enough to throw me into orbit as I am really quite phobic about being sick.  (called Emetophobia) so by mid-week, I’m boil washing anything that’s not nailed down, continually wiping surfaces and washing my hands until they hurt.  It’s all pretty exhausting but Orkney Beef told me I did well and I must be getting better as I didn’t cry!

Anyway, the weather is not conducive to getting mountains of boiled washing dry, it hosts the dreaded winter vomiting bug, it makes you freeze as you dash from car to workplace, house to car and car to swimming pool, but at least it looks pretty.

This photo Stromness was taken by photographer Debbie Sutherland and you can see lots of her moody and atmospheric shots on Instagram under the name Debbiesutherland1.

One enjoyable thing about winter is being able to get cosy in the evenings and do some hobbies that seem to get left in summer months.  I was recently in the library and found you can now borrow jigsaws.  I chose one, checked it out then went home and took the dining table hostage.  After complaining constantly that I’ve not enough hours in the day I manage to make a vast amount of hours disappear to this jigsaw puzzle. It’s a most enjoyable way to hemorrhage time though I’ve discovered.  I will now spend the same amount of time looking for the piece that’s missing.

I’m still swimming regularly before work.  5 times a week is my average and I’m loving it.  A few weeks into it I asked Orkney Beef if he thought I’d lost weight.  He looked terrified as if he was about to tread on a landmine and blow himself to pieces.

Well, sort of here. *points vaguely at my body*

You’re just saying that because I’ve asked?  You can’t actually notice can you?

A couple of weeks ago Orkney Beef sold his running machine and bought me an Apple watch.  He is kindness personified. (it’s and early birthday/Christmas present by the way) He bought one that I could take into the swimming pool and measure my distance, lengths, calories burned etc. He knew how much swimming means to me and wanted to do something.  There was only one problem.  I was too scared to take it in the water!  I ended up researching and asking advice before taking the leap.  Now I use it all the time and love it.  Thank you Orkney Beef for knowing best (this one time) I love it.

Disappointments are a part of life and something I firmly believe we shouldn’t protect our children from. We should teach our children how to cope with disappointment and get back up again.  However,  Tech Support son had a disappointment yesterday and I could’ve cried for him.  The mother in me wanted to shout and scream and make thing happen.  I couldn’t, but what I COULD do was take him out for lunch and hot chocolate, put the smile back on his face.  Tech Support is the quiet one in the family but he has an excellent sense of humour and yesterday was no exception. His jokes and comedy timing had us both in stitches, he was restored.  He got back up again.  Well done TS. 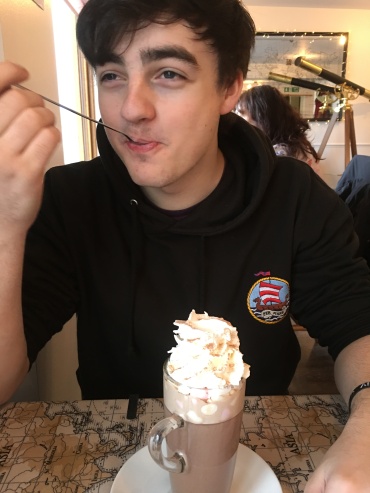 I’m excited about the week coming up.  It’s because I have a week off work and I’m having a ‘staycation’  Not going anywhere but big plans to complete the great Christmas tidy up and prepare.  We’ll see.  I’ll report back.

2 thoughts on “My Week In Pictures”