All Good Things Must Come To An End

It’s September.  How is this so?  That means summer is over and we are now free wheeling towards Chr***mas.  I know.  This is meant to be a positive and light hearted blog and I’ve just brought the mood down considerably, but I have happier news.  In Scotland the kids have been back at school for a couple of weeks now. (or is it three?  I’ve already lost track….) It’s not often I go to the pub any more, never mind on a school night, But this week we had occasion to as the two guys Ally and Martin who did a summer placement at our church were off back down South.  So we had a leaving ‘do’ in the local and laughed for hours.  Mainly because we were so happy they were going 😉

*I just threw that last line in to see if they actually read the blog.

It’s now quite dark by 8.45pm (yuo, that’s because we are free wheeling towards Chr***mas) but there are still bonnie sun sets and sun rises for those who are awake.  By some mircale Ally managed to drink several pints (on the school night) and still make it to the boat by 6am (ish)  The photos were taken by him as evidence he made it.  I had my doubts.

We’ve had visits from Peedie Meatball  (or is that Peedie Meatballofenergy?) as well as my neice Becca Boo who is from Colorado.  She’s on her way to do Semester at Sea so will be away for a few months but managed to nip up to Orkney for a quick hello before she goes. 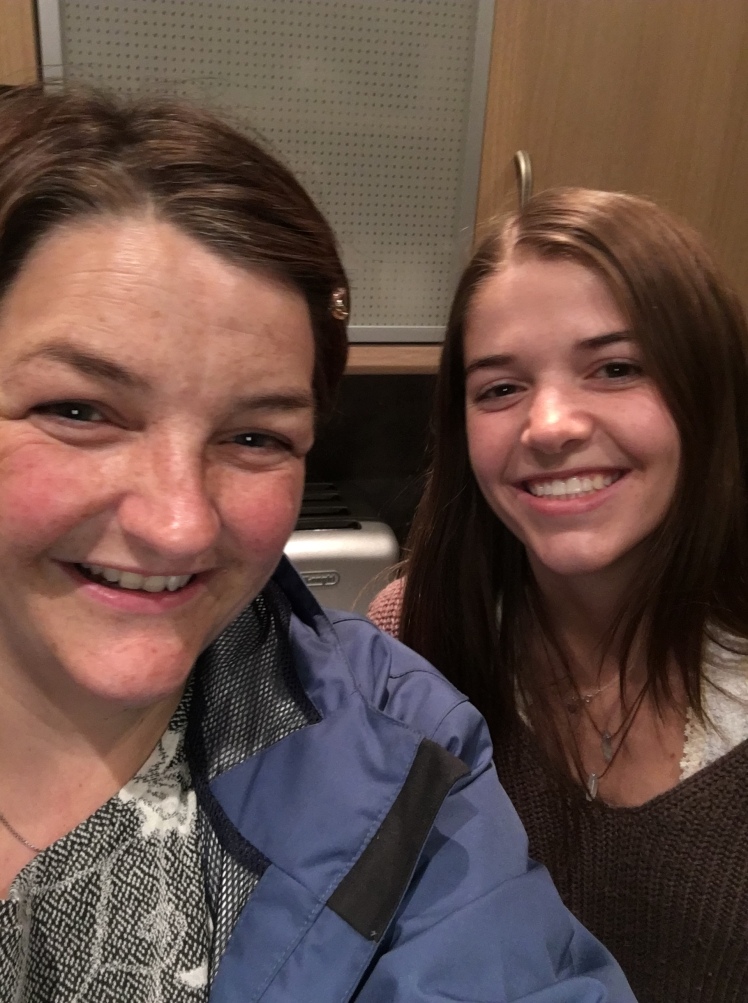 Orkney Man Says I Love You and Makes The News

A reporter read it and asked if she could speak to me to pitch the story to a magazine.  Apparently the I love you bit would strike a chord with human interest and be something people would like to read. So we shared our story with her and were told I was told it would go online before it gets pitched to magazines.  I guess we had no idea the interest but I got to work on Friday to an email saying it was in much bigger profile newspaper websites than I was expecting. It’s now in at least four news paper websites and will soon be pitched to magazines.  There’s no money in online stories but with a bit of luck we may end up being paid for a magazine story, but probably in boiled sweets….

In true Chinese Whispers style, some of the facts have gone a bit iffy but on the whole it’s pretty much what happened.  Here’s a link to a couple of the websites.

Watch the moment dying man signs I love you

If you click on the link below the little video is WELL worth watching.

“I’d just been told he could die, so hearing – or at least seeing him sign – ‘I love you,’ moments later, was magical.” pic.twitter.com/QIyC5FOcKS

One of the websites  (not included) have comments from readers criticising the choices I made when Orkney Beef was so ill and some even saying if he could signal I love you then he wasn’t actually in a coma.

Dear critical people, you’re not me, you weren’t there, and you are clueless.  Cheers.

But the majority of people were lovely, and thank you.

On the subject of I love yous and survival, it’s been six years since I said I do. still do. Mainly I do the laundry, the beds, the dishwasher, the tea, the shopping, the cleaning.. he does the grass, the cars, the fixing, the firewood…. six years in Peter and Jane’sville. Not bad for a man who keeps trying extreme ways to escape. Happy Anniversary dear

Have a great week everyone, and remember, you don’t have to be drugged up in a coma to tell someone you love them.  Unless you’re my Orcadian husband. 😀